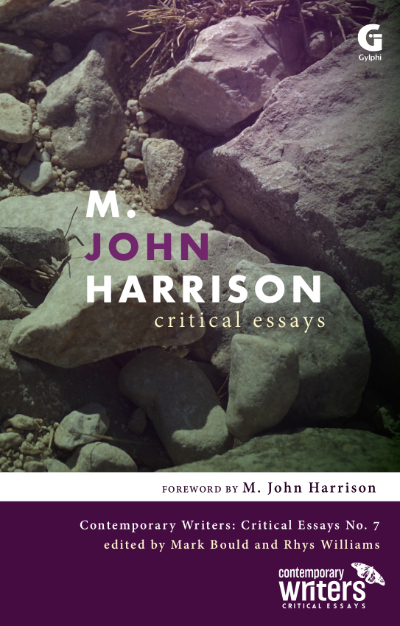 This critical collection examines the way in which M. John Harrison has been at the forefront of British speculative fiction, from the New Wave to the New Weird and beyond, excoriating its lumpy prose, refusing its cheap consolations, and reinventing its most debased forms. His depictions of a fallen world, of fragile humanity, entropic landscapes and self-harming trajectories, of transport cafes, moorland peaks and legendary cities, reinvented sword’n’sorcery, space opera and supernatural horror as profound meditations on desire and loss.

An indispensable compendium of essays nearly as varied and compelling as its subject, the writer who (despite his most stringent objections to being valorized) remains one of contemporary literature’s genuine legends, and for good reason. --Elizabeth Hand, author of Generation Loss and Curious Toys

Revered by such writers as Iain Banks, Neil Gaiman and China Miéville, M. John Harrison has long influenced the development of SF/F but been curiously overlooked in academic criticism. The first scholarly collection dedicated to his writings does a fantastic job of introducing readers to the compelling strangeness of his narrative worlds. From his early review essays for New Worlds in the late 1960s to his Viriconium series and more recent Empty Space trilogy, Harrison has delved into oneiric landscapes full of grotesque ambiguity and cracked perspectives. In examining the techniques of recursive intertextuality, ontological questioning and destabilisation of genre expectations, this collection suggest rich avenues of inquiry for future Harrisonian scholarship. --Caroline Edwards, Senior Lecturer in Modern and Contemporary Literature, Birkbeck, University of London

Finally! A comprehensive critical resource for this most singular of contemporary writers. Bould and Williams have assembled a formidable array of creative, fiercely intelligent, witty and original essays, including a contribution by the man himself. This collection stands as proper tribute to Harrison’s exceptional work. All the reading lists, everywhere, now! --Graeme McDonald, Associate Professor of English and Comparative Literary Studies, University of Warwick

‘Provide a sense of linkage for unlinked things,’ Harrison says in his opening gnomic notes here, ‘Place things together so that they seem embarrassed’. Ornery, oblique and downright weird, Harrison’s fiction is a taut snare. The excellence of this collection is its ability to make sense of the geometry of these traps. Authoritative editors bring together some of the best critics of science fiction, fantasy and horror to map the strange edgelands where Harrison’s fictions brew. Essential reading. --Roger Luckhurst, Professor in Modern and Contemporary Literature, Birkbeck, University of London

Preface: The Other Side of Some Inexplicable Disaster (M. John Harrison)

A Young Man’s Journey to Ladbroke Grove: M. John Harrison and the Evolution of the New Wave in Britain (Rob Latham)

‘There have been many Viriconiums’: From the Pastel City to London (Paul Kincaid)

‘Southend will follow you wherever you go’: M. John Harrison and the Fiction of Everyday Life (Milly Weaver)

‘Sparks in Everything’ or ‘A Tearful Overnight Understanding’: Posthuman Becoming in the Empty Space Trilogy (Timothy Jarvis)

‘Something that Looked Partly Like a Woman Partly Like a Cat’: Deliquescence, Hybridity and the Animal in the Empty Space Trilogy (Chris Pak)

‘The Geometry of Deterministic Chaos’: Fractal Structure and Recursivity in the Empty Space Trilogy (Nicholas Prescott)